Last week, we both had a respite break. Mum went to a residential home where she has stayed before. I spent three nights at the Chalice Well retreat house in Glastonbury. I like to go there once a year, if I can. It allows me to process stuff that I can never fully process while daily life is going on. I can let my mind and my spirit enter those deep places where my true thoughts lie.

As always, Mum started to get anxious about going away. In fact, it was as stressful preparing her to go away for 4 nights as to go away for a couple of weeks! The morning we were due to leave, she got herself in a terrible state. I had to tend to her, clean up mess, change sheets. With a sinking heart, I rang up and cancelled my taxi to the station. But I had a sneaking suspicion it was all a case of nerves and indeed, she eventually settled down. Just before the paid carer was due to arrive, I ordered a second cab and tiptoed away.

By now I was running late. I had to get there by 5pm or there would be difficulties getting the key. The journey by public transport took six hours and at one point, my train was held up and I began to panic. I made it in time but I was very tired – and before I could rest, I had to walk down to the shops and buy something to eat. That night, I felt ghastly, couldn’t sleep – I decided I must be detoxing. The next morning, the first thing that came into my mind was: the television is doing my head in!!!

I don’t mind cleaning up blood and shit, I don’t mind the endless washing when mum’s wet the bed. I don’t like doing it, but I understand these are distressing episodes for mum – and part of the reason I’m living here. The interminable washing/shopping/cooking etc bore me, but I accept it’s an inevitable part of caring for someone who can’t take care of themselves. Her memory loss has been difficult to deal with, but this online course on dementia is helping me to cope. However, when I do get time to myself, when I’m not on deck as it were, that time is being contaminated by the brain-flattening, intuition-crushing effects of the continual blaring TV.

I didn’t own a TV before I came here. I did sometimes watch programmes on my computer but, as a rule, I prefer to listen to the radio, or music. Mum has the television on for several hours every day. She has the volume turned up so loud I can hear it even if I’m in another room. It’s a small house, and it’s impossible to get away from the noise. What’s doubly annoying, is that she often falls asleep in front of it. So I can spend an hour vainly trying to blank out the TV so I can read – and then discover mum’s not even been watching the programme! I have got headphones, but sometimes, I don’t want to listen to music or the radio – I just want silence!

There’s no hope of weaning mum away from something that has been her life-line for years so, the only answer would be to close the door of my room. But I felt that would be a cold, unfriendly act which would make mum feel abandoned. However, I’ve now reassessed the situation. Since I got back, I have been closing my door, even though I know it probably upsets her. And I am feeling so much better! Not only do I get to read, write and go online in peace, I feel like I’ve asserted my right to spend my evenings as I wish. 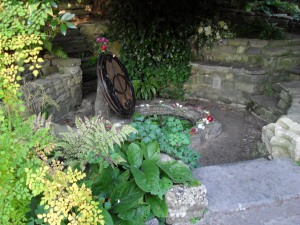