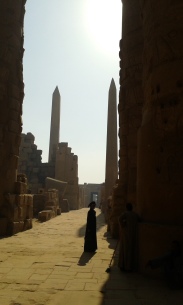 I had a marvellous holiday in Egypt. So many people warned me not to go, said it would be dangerous, but I never felt afraid or threatened at any time. I felt for the local people who are struggling financially because tourism’s been so severely affected – But because there are so few tourists, the temples and sites weren’t swamped with huge gangs of people and there were hardly any other ships to spoil our peaceful passage down the Nile. Not only were there few cruise ships, the one I was on was practically empty. On the way down to Aswan there were about 20 passengers – half Egyptian, half British. On the way back there was only the nine – yes, nine – people who were on my tour. I was so lucky they didn’t cancel it.

The Pyramids, the Sphinx, the Egyptian Museum in Cairo. the Valley of the Kings, the temple of Isis at Philae, the Aswan Dam, Luxor, Karnak, Abu Simbil, the experience of the Nile itself, watching life on the river banks that can’t have changed much for centuries: it was all more fantastic then I had imagined it would be. But I’d also imagined I’d spend my evenings alone in my cabin reading and writing in my journal – but I was wrong!

All kinds of activities were arranged for us: an Egyptian night, when we all got dressed up in Ghelabayas and looked quite unlike Egyptians; a Nubian night – which was a lot of laughs; a visit from a belly dancer. Because there was so few of us, I couldn’t take my usual back seat but had to be a good sport and participate in party games, or attempt to do local dances (!). In short, I was forced to have fun.  Before the trip, I had wondered who I would sit with during meals. I’d thought ‘there’s always someone to pal up with or who will invite me to join them’ – but as we were so few, we all sat together round one large table. I felt integrated into one happy group. Dropped my carer’s persona all together.

At home I keep my comments simple, if not monosyllabic because I often have to repeat them over and over again. I’d forgotten I can be cheerful, chatty, witty, cultured – even opinionated! So on some level, the trip has helped to give me back to myself.

But what’s even better is that mum also really enjoyed her respite break. Since we got back she’s been talking about it non-stop. ‘In the home’ this, ‘in the home’ that. She asked me – why didn’t you leave me there longer? As she usually complains that I’ve left her there too long I was pleasantly surprised. I asked her – would you like to go there more often, not just when I go away?  And the upshot is, she’s going back to spend a few days there at the end of the month which means I can go to London for a couple of nights to spend time with friends. Fingers crossed this continues…